Good morning, and welcome to another edition of “Games with Coffee.” It’s Espresso Shot Review time! Today, I’m looking at Golden Axe for the Sega Genesis – a game I’ve never even played before, surprisingly enough. I was introduced to it from a guest review on The Well-Red Mage’s blog and I decided to look into it myself. How did it fare in my eyes? Read on and find out! 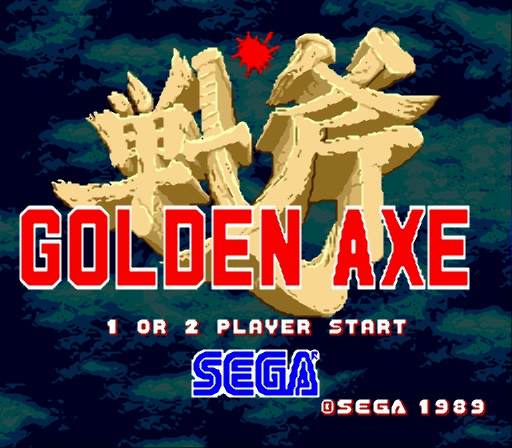 Golden Axe is a side-scrolling, beat-em-up/ hack-and-slash action game. First introduced in 1989 in arcades, it was ported to the Sega Genesis (or Megadrive) and Master System of that same year. It’s been a part of several compilation titles, such as the SEGA Smash Pack and Sonic’s Ultimate Genesis Collection and is presently part of the SEGA Forever collection of free, mobile titles available on iOS and Android.

Taking place in the Conan the Barbarian-inspired land of Yuria, Golden Axe tells the story of three warriors who are tasked to save the King of the realm, his daughter and the titular Golden Axe from the Death Adder – A powerful warlord who threatens to kill the royal family and break the axe unless the people in the kingdom acknowledge him as their ruler. Each warrior however has their own motivations for defeating the Death Adder beyond saving the king and his daughter; Ax-Battler, the barbarian who wields a sword and Earth magic, seeks vengeance for his mother’s death. Gilius Thunderhead, an axe-wielding dwarf from the mines who uses Thunder magic wants the Adder’s head after his twin brother was killed by his henchmen. Finally, Tyris Flare, an Amazon warrior who specializes in longswords and Fire magic, will stop at nothing to pay back the Death Adder for the death of her parents.

It’s a pretty simple story that’s common for this era of gaming, but its nice to see that the characters also have their own reasons for fighting; it makes them look less one-dimensional and allows the player to empathize to their situation.

One complaint I have is that the in-game story doesn’t exactly match what’s listed in the instruction manual. In game, each character mentions that their friend, Alex, died in battle and that they will avenge him while saving the land. I would much rather have the game narrative to stick to the “avenging the death of loved ones,” plot instead of avenging some random dude named Alex. 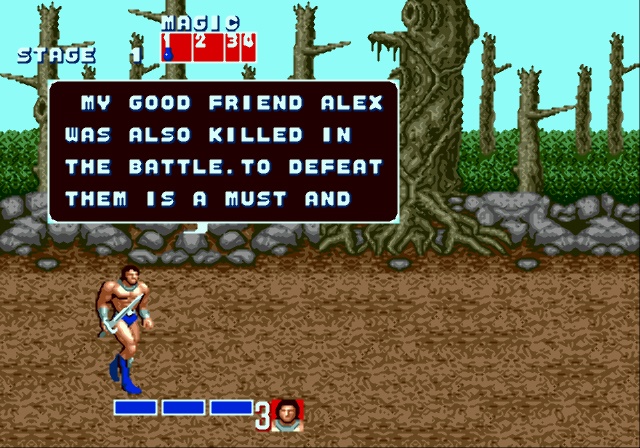 Who is this “Alex” you speak of, Battler? Aren’t you supposed to be avenging your mother?

Controls are simple in Golden Axe. The directional buttons move the character, the A button activates magic, the B button makes the character attack and the C button is the jump button. In addition, there are several moves that can be useful as you traverse the game. You can hit an enemy multiple times by mashing the B button, but it leaves you open from behind. If you’re in close while rapidly tapping B, you’ll pick up and throw the enemy, good for giving you some space when you’re surrounded. Double tapping left or right makes the character break into a run; hitting B while running initiates a dash attack, useful for getting the drop on an enemy. You can also use aerial attacks by jumping and hitting B while in midair. Doing a jump attack while running yields a more powerful attack that can one-shot or severely damage enemies, but it’s a bit tricky to pull off. Finally, you can use a powerful reversal attack by hitting B and C together, but it’s  hard to connect and leaves you open if you don’t.

Each character’s magic meter has a different maximum level. Gilius maxes out at three, Ax-Battler maxes at four and Tyris maxes at six. Each level corresponds to the strength of the magic used, so, while it’s easy to max out Gilius’ magic, his strongest spell is much weaker compared to Tyris’ strongest spell. an awesome fire-breathing dragon used when her magic meter is at level six. To use magic, you’ll need to collect blue pots, which are only dropped by bag-carrying Thieves. You’ll have to smack them a few times to get the pots. You’ll sometimes run into these guys as you progress through each level, but at the end of each level you’ll enter a bonus round where you battle with at least one Blue Thief and sometimes a Green Thief who drops meat, which restores one bar of your character’s health. 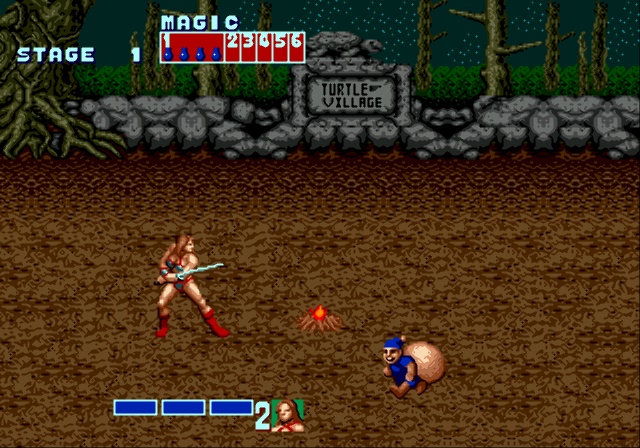 Hey! Give those back!

There are seven types of enemies, including boss characters, to be wary of, from henchmen who use maces and clubs to axe-wielding Amazonian women, skeletons who use swords and shields, giants wielding hammers and powerful, armoured knights. You can easily tell the difference in how strong they are based on their colour pallet.

They might not seem like much at first glance, but it’s advised to avoid being surrounded, because even the weakest of enemies can overpower you when they’re coming in from both sides, which happened to me quite often and resulted in me losing a lot of life. I would have liked the reversal attack to be easier to connect so I could get out of those jams without being overwhelmed. I also found that the enemies were a bit bland at times and I would have liked to see some more variety. I compare this to the TMNT 2: the Arcade Game port for the NES, where there were a TON of different flavours of enemies to fight against. I do like how the giants wielding hammers laugh at you when you’re knocked down. 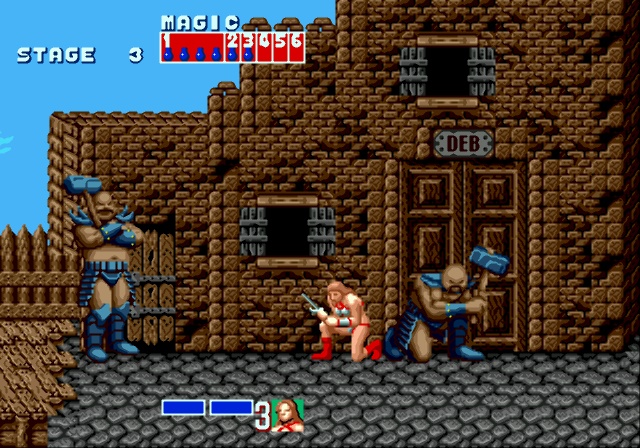 Quit laughing at me, you bastard…

Boss fights either pit you against a gauntlet of enemies, or you fight against the Death Adder himself at the very end. What’s interesting is that for the home console version of the game, they added two extra levels and a new final boss – the Death Bringer, mentor to the Death Adder.

Another feature that made the game interesting is the use of creatures as steeds. Enemies usually ride these, but they can be easily knocked off with a well-placed kick. There are two types of rideable creatures – a Chicken Legs who attacks by swiping its tail or a Dragon who can either spit fireballs or breathe a jet of fire that incinerates your foes. The creatures are really fun to use, but if you are dismounted more than three times, it runs away. A minor annoyance, but it’s fair; the creatures would have made it all to easy to beat the game.

Speaking of which, the difficulty is not too bad compared to other beat-em-ups, which is a good thing because it allows for anyone to pick up and play it without becoming too frustrated. It’s also pretty short, at about eight levels, meaning it won’t take more than a few hours to fully complete it.

While the graphics are dated, for a game that’s almost 30 years old, they aren’t that bad looking. The playable character sprites have a fair amount of detail in them and their animations are pretty fluid.

I do like the environments, they really elicit a medieval-fantasy like feel.  I also like how there’s a day to night transition right before a boss fight, it makes the game feel more alive and the stakes more dire. 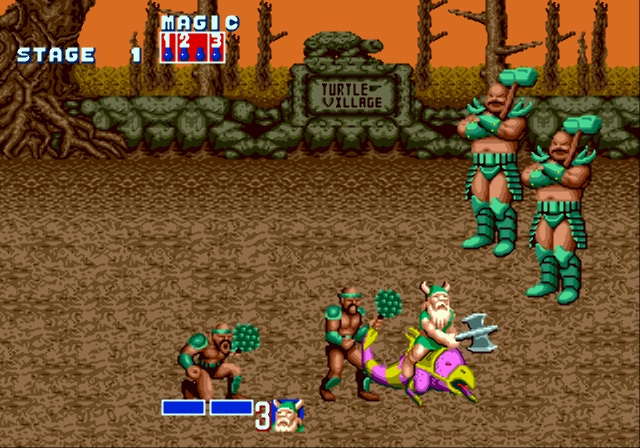 In stage 4, your battles take place on the back of a giant eagle, which I though was pretty cool! Though, I had to wonder, “How does a pathway exist on an eagle?” Also, “Why are there skeletons burrowed in this poor eagle’s back?”  It somewhat didn’t make sense, but hey, who am I to complain? 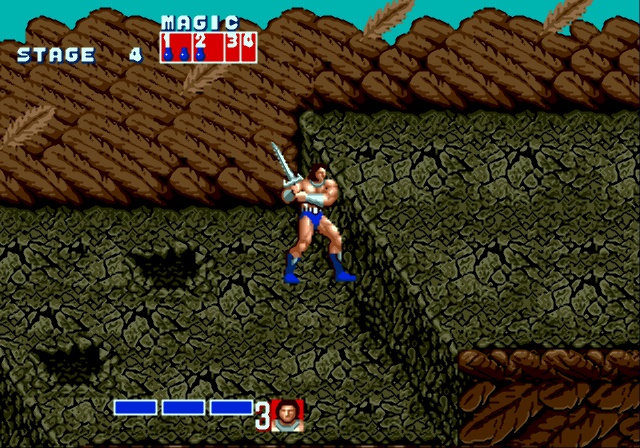 That must take some serious pruning to maintain…

I didn’t like how some of the enemies looked; again, they looked a bit bland, but from the animation standpoint, at least they didn’t move as blocky as they looked.

I found the music and sound effects to be a bit on the tinny side, but still enjoyable nonetheless. Stage 1’s music really set the tone for the game – it gave off an “I’m storming your stronghold and taking you down, if it’s the last thing I do!” kind of feel, which was pretty rad.

The death screams were somewhat hilarious, but they started to grate on me a little bit, especially after hearing my character die again and again (Beat-em ups aren’t my specialty). It didn’t stop me from enjoying the game though!

With three characters to play as and each differing in magic, reach and speed, there are some opportunities to replay the game. The story doesn’t change for each character however – it’s still the same.

On top of the arcade mode, which you can play with two people, there is a Beginner mode, consisting of the first three stages with easier enemies, perfect for those who are either new to the series or need a refresher on how to play. Also, there is The Duel mode, where each round pits you against different types of enemies and the goal is to survive for twelve rounds. Each duel is also timed – if you don’t win in the allotted time, you lose one bar of energy.

It’s quite challenging, considering the fact that you can’t use magic at all in this mode; you’ll have to focus on weapon skills if you are to succeed. If you’re playing with two players in The Duel mode, you fight against each other instead.

Golden Axe’s cast of characters, use of powerful magic and rideable creatures help make the game stand out over many others in the genre. But the low variety in opponents and their blandness, coupled with the fact that it’s easy to become surrounded and a lack of a proper reversal technique hurt it in the long run. Nevertheless, it’s still a fun game to pick up and play, especially for two people!