Good morning and welcome to another edition of “Games with Coffee.” How’s everyone doing?

Today’s post is more of a PSA than anything else. Let me set the scene here:

Last month, I went on a cruise up the West Coast, starting from Los Angeles CA and ending in Vancouver BC. As part of my trip preparations, I decided to take my GCW-ZERO system with me, mainly to play a Super Mario Bros. 3 hack.

Now, I’ve had this particular system for a couple years and while it’s a great and versatile unit, it also has its flaws that I didn’t address, or attempt to address at the time. The D-pad didn’t sit well on the unit, and made it register an up-left input instead of a direct up input whenever I pressed the up button. Also, the A button, had a tendency to stick, which made run-and-gun games like “Super Metroid” difficult or nearly impossible to play. Even though there are ways to address those issues, like using silicone grease or taking apart the unit and replacing the buttons with new ones that improved playing performance, I decided not to address them and carry on.

Long story short, as soon as I got on the plane to LA, the D-pad stopped responding. I tried playing using the stick only to find that control was awkward and uncomfortable after a period of time; it just wasn’t the same. Thus, I was without my preferred system almost the entire trip, which, while only mildly inconvenient, was still annoying nevertheless.

If I was more proactive, I would have addressed these issues much sooner. Thankfully, the guys who manufactured the GCW-ZERO have partnered with a 3-D printing company called Shapeways that provide improved replacement buttons for the system. I’ve ordered and received a full set and I’ll be undergoing the painstaking task of taking apart the system, installing the components and putting it back together again. (Apparently, the process is quite hard. Wish me luck!) 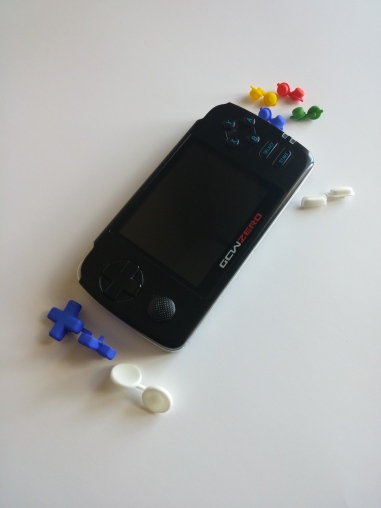 My next personal project.

This leads me to today’s PSA: Please, please, PLEASE, take care of your systems and games! As mature, distinguished gamers, we pay a lot of money to indulge in one of our favourite hobbies, so it’s important that you make sure your systems and your games are in perfect working order. Proper maintenance will allow you to enjoy gaming to your heart’s content, without worrying that your system will break down or that your games will crash. And if you suspect that something may be wrong, whether it’s major or minor, get it looked at ASAP. It could mean the difference between either getting it repaired without cost or spending hundreds of dollars on getting your stuff replaced.

Do you guys have any stories about maintaining your systems and games? Share them in the comments below! And stay tuned to for the next edition, because I’ll be talking about a video game music site that’s dear to my heart: OverClocked ReMix!

This is Ryan from “Games with Coffee,” telling you to Keep Gaming and Keep Brewing. See ya next time!

2 thoughts on “A Reminder to Take Good Care of Your Games!”